In a time to be rewritten, the gestures return: slow, precise, careful. Attention to detail becomes a priority. Patience is a merit. Ancient liturgies transform precious or rare materials into unique forms to convey emotions, recounting distant landscapes, yet which are so close to our new sensibilities. The word 'savoir-faire' contains a profound meaning linked to a strong intrinsic value and to the imperfect perfection of a creation that is carried out mainly by hand. It is the rediscovery of matter, its reassuring touch and warmth, its unique texture enhanced by processes that draw on knowledge, traditions and collective or family experiences. The story is then an integral part of the project.

And so in the mod. UW12/Sahara by Rigards x Uma Wang (in the opening photo), a visual journey is undertaken that combines the evocative images of the ammonites of the Jurassic seas with the enigmatic double spiral staircases of the Vatican Museums, but also with the tribal ornamental rings worn by some ethnic groups of Africa and Asia, giving rise to assonances, harmonies and emotions. In titanium, the mod. UW12, available in both sunglasses and optical versions and which debuted at Paris Fashion Week S/S 2023, materially translates these different suggestions into rims decorated with an incised concentric ring motif of 568 fine ridges encircling each rim.

But it is above all for Maison Bonnet that savoir-faire takes on a fundamental importance, becoming the main ingredient of excellence that yearns for (and achieves) perfection. A tradition handed down from father to son to Franck Bonnet, fourth generation of the family and who runs the company together with his brothers, Steven and John. It was their great-grandfather Alfred who embarked on this adventure in the 1930s in the Jura, the nerve centre of French eyewear, specialising in the manufacture of tortoiseshell and gold glasses. Then came the beginning of a new story with the opening in 1950 of Maison Bonnet in Paris by his son Robert who, in turn, passed on to Christian his unique art in making bespoke glasses in horn, tortoiseshell and acetate. Franck Bonnet then welcomed this precious legacy from his father Christian. With passion. With love. Drawing on that archive of techniques and processes that only the hands can teach and only the intelligence of other hands can learn. Exclusive glasses, designed to last over time, studied in detail in the shops of Paris and London, together with customers, including Yves Saint Laurent... From the choice of the model, which is entirely handmade, two to four months pass and it takes 12 trials to have your own bespoke acetate or horn glasses, such as the Colbert model in anthracite gray horn and white streaks. For a tortoishell glasses style, on the other hand, you have to wait 9 months. And the result? Unique in the world, as indeed is the face of every person. It is no coincidence that Maison Bonnet, which is part of the "Grands Ateliers de France" has also received, among the various awards, that of "Entreprise du Patrimoine Vivant". 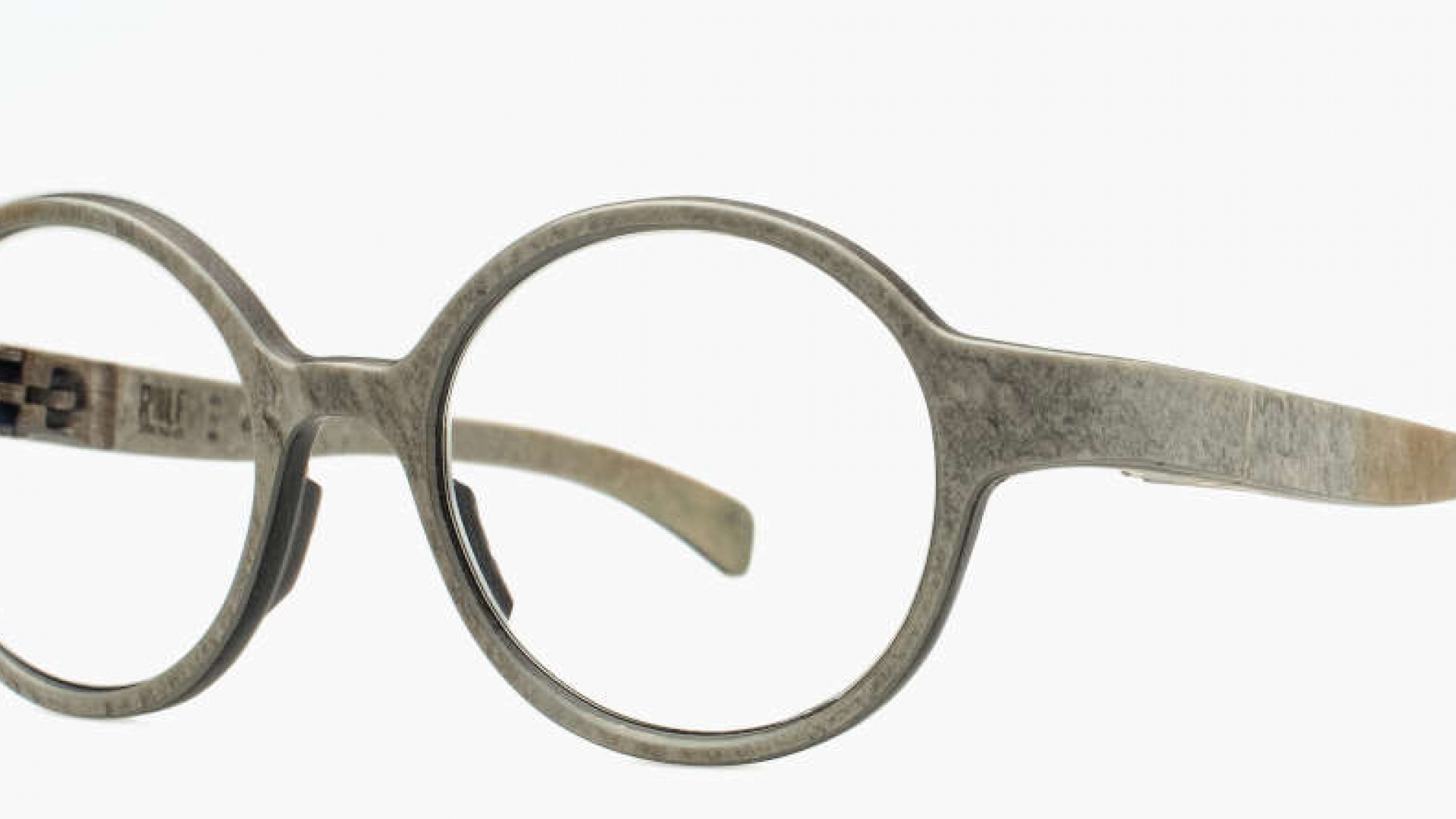 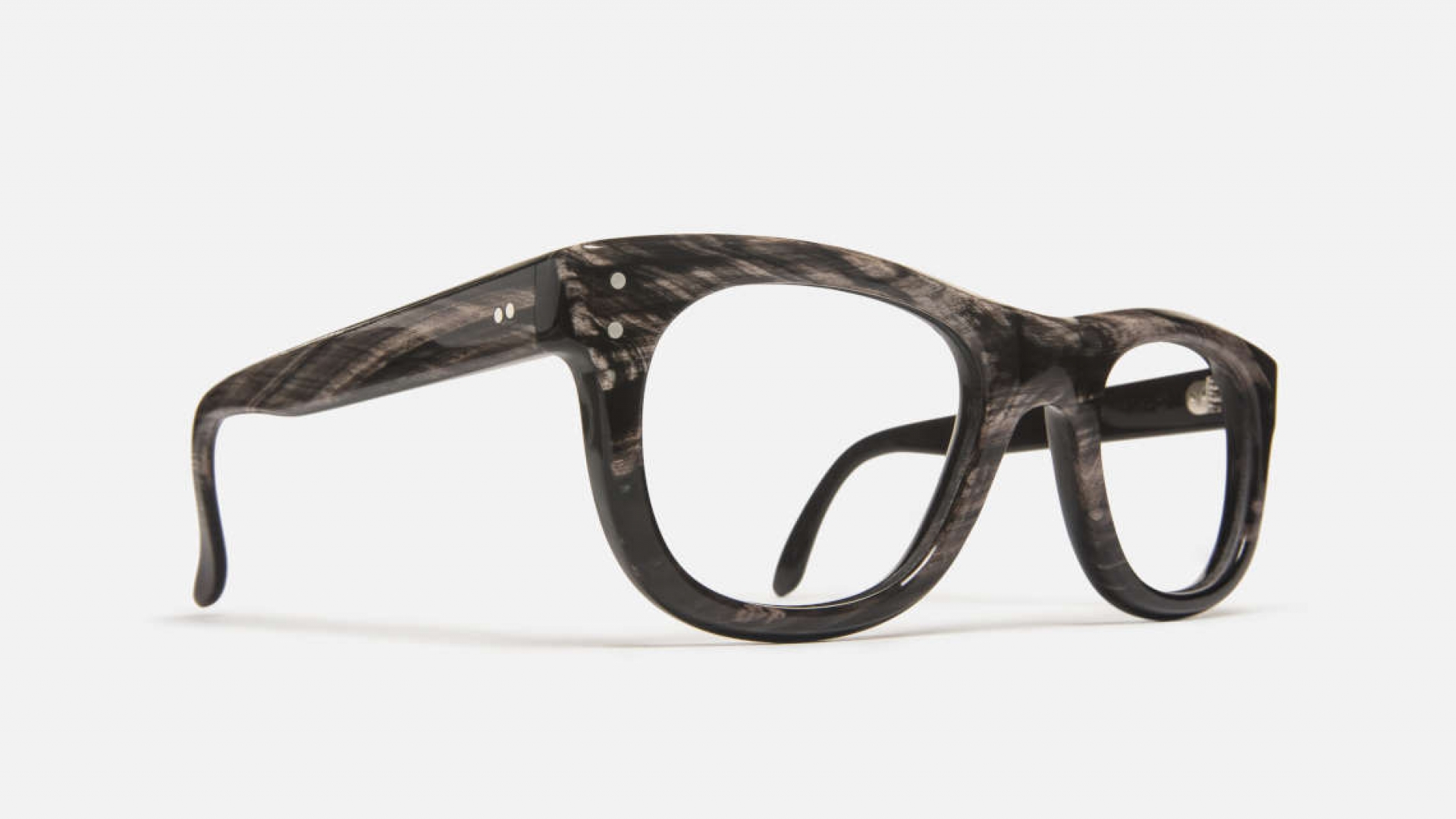 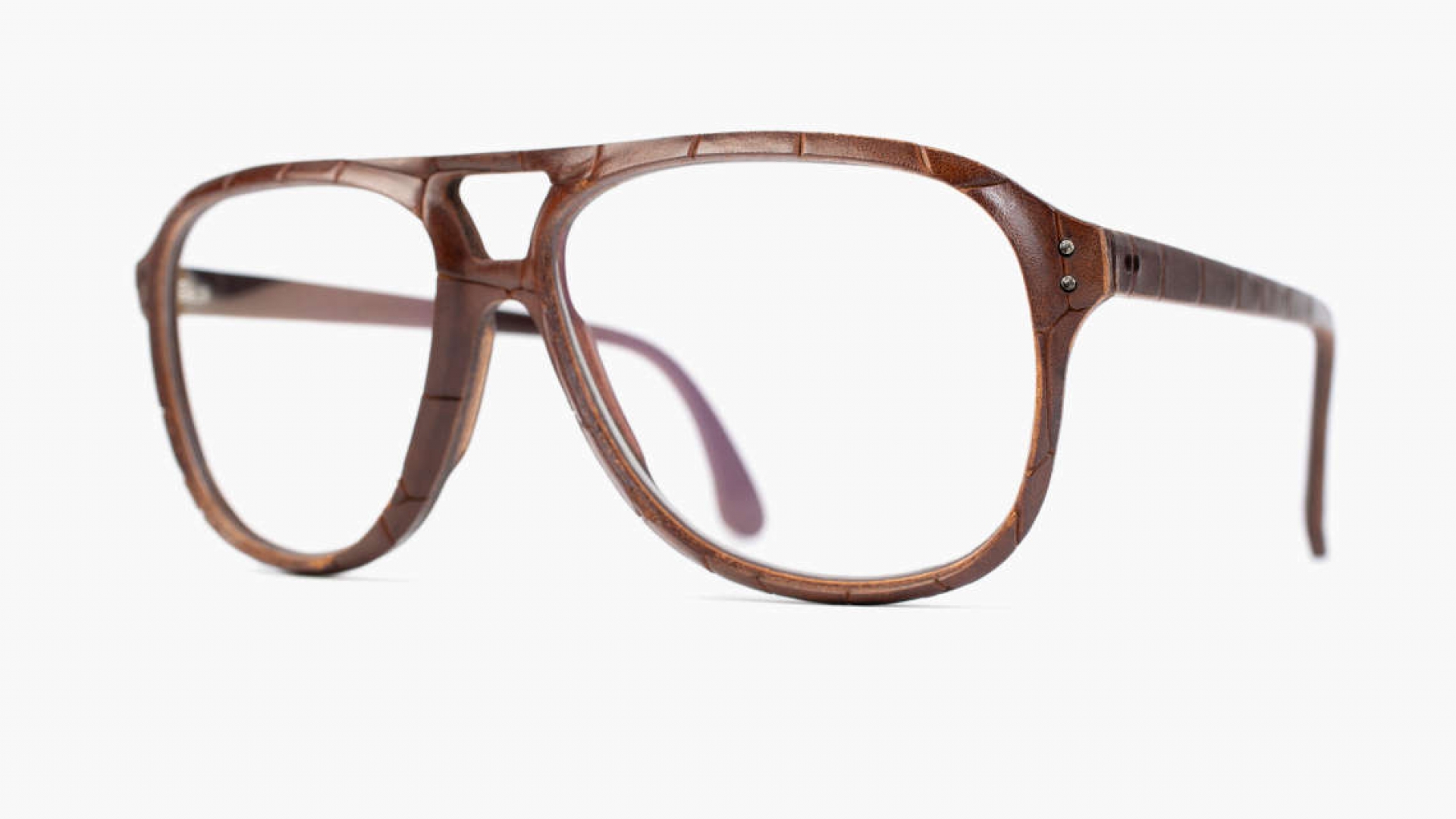 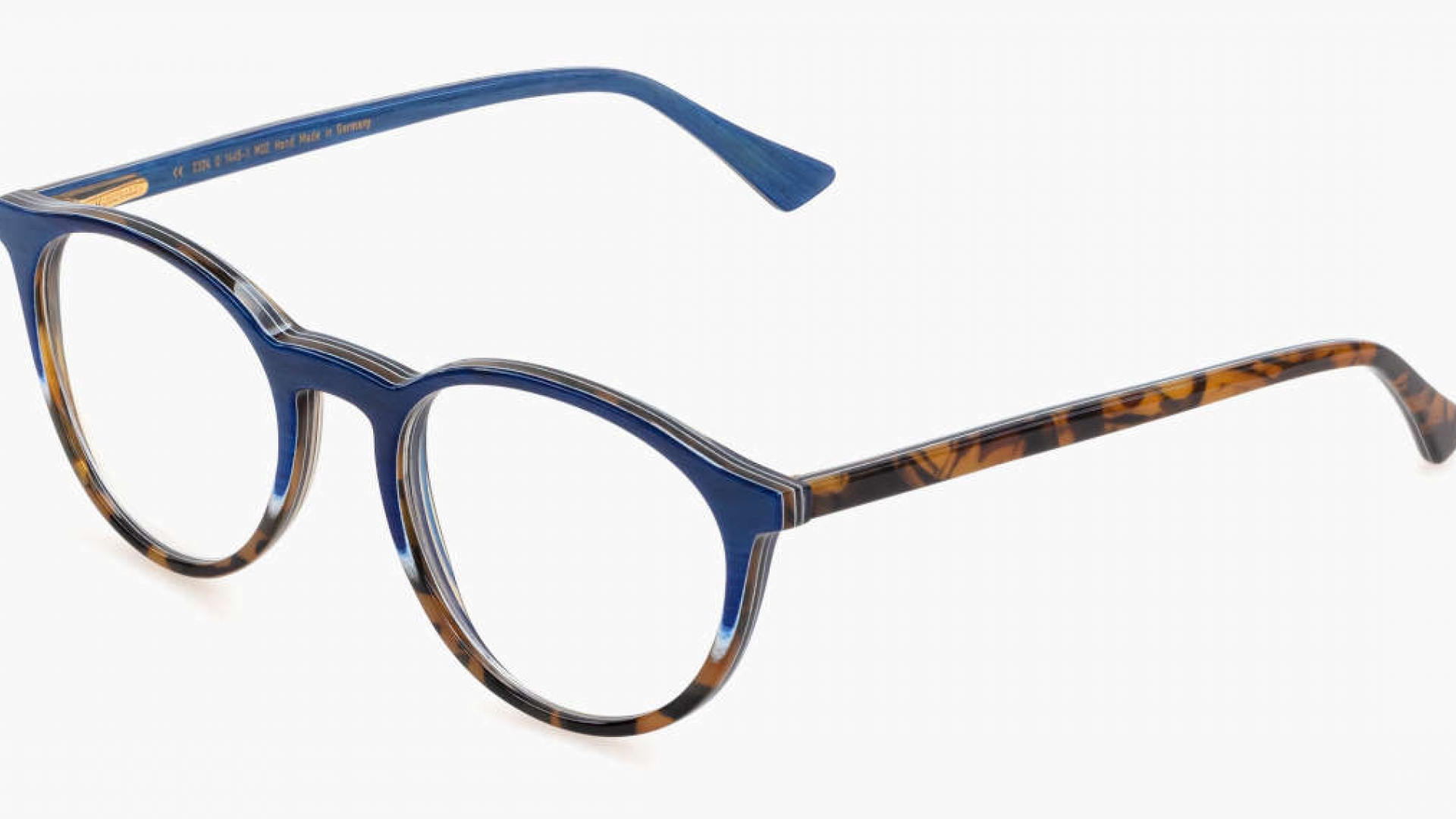 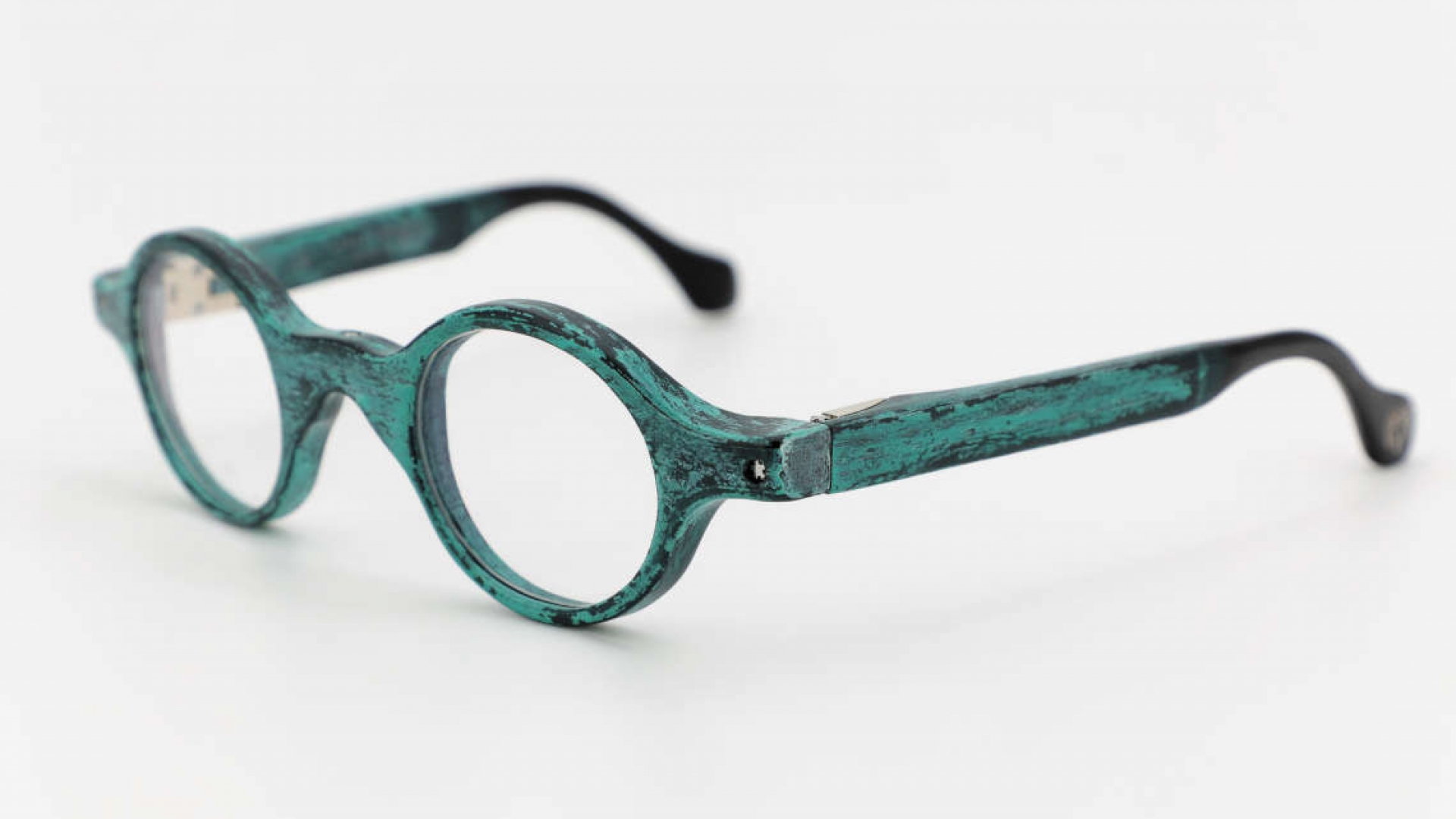 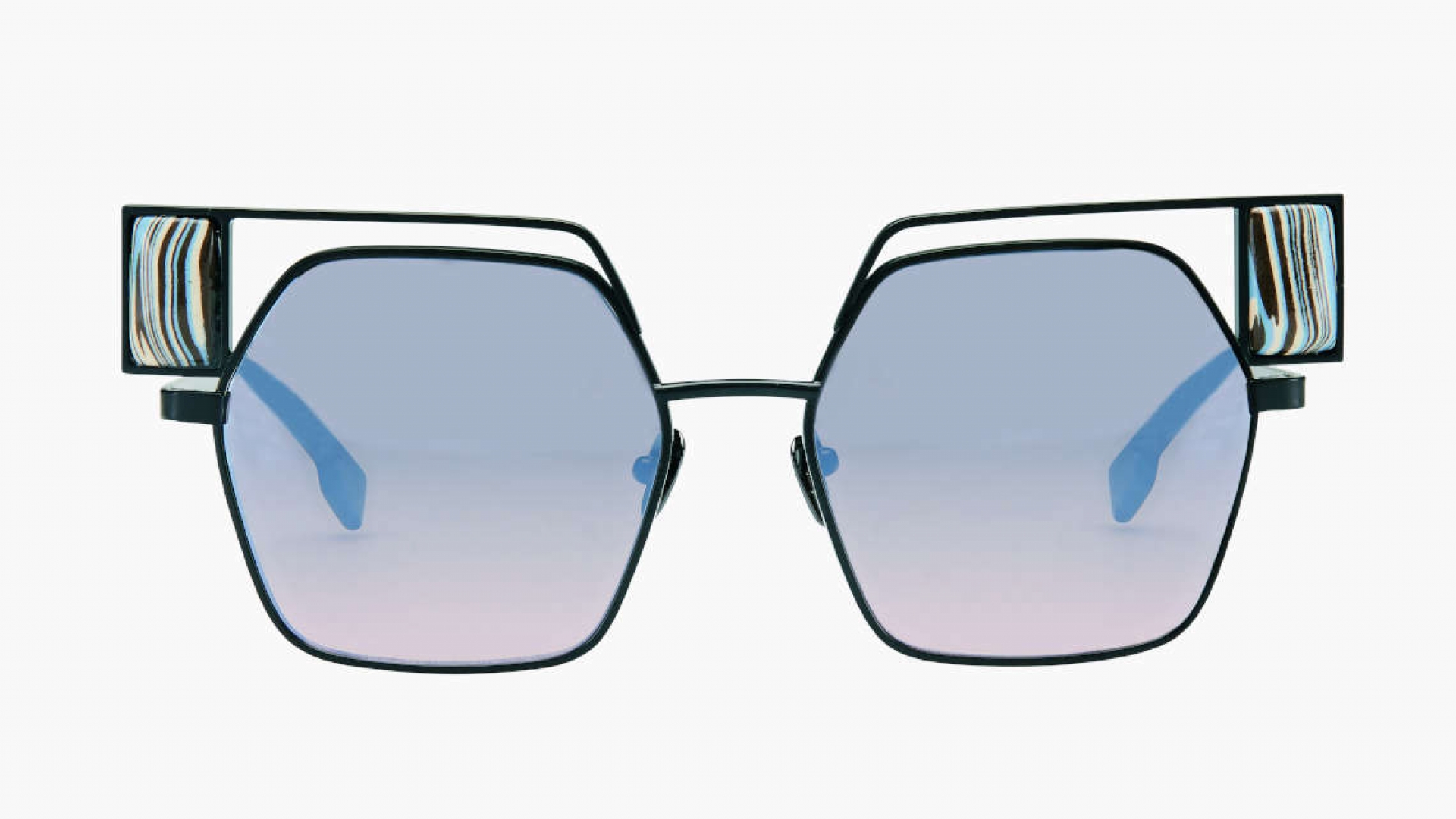 And it is horn again that is used by Hoffmann Natural Eyewear, worked since 1978 by experts in the atelier that is located in the picturesque region of Volcanic Eifel in the West of Germany. To the natural effect of a material that each time presents streaks, lights and different shades, the company's ability to intervene with colour is added, without altering the sense of an authentic beauty in the least; indeed exalting it. An example is the model 2324 D 1445-1, with the classic panto shape, where an intense blue contrasts with a caramel shade with dark markings. Each model can then be infinitely customised, according to the various needs of the customer. For Sébastien Geslin, starting to make glasses by hand was instead an urgency and a necessity stemming from the fact of never being satisfied with the styles offered by optical shops. He himself, who wears eyeglasses... After working for various luxury brands, he dedicated himself to the production of glasses, specialising in the use of precious and rare woods. Small masterpieces have emerged, such as the Sala Weed model in Morta wood, millenial oak fossil wood, bleached and then coloured in green with an antique effect and finished with six layers of paint. The tips, on the other hand, are in black buffalo horn. But Sébastien went beyond aesthetics, designing an S-Temp system, allowing a quick adjustment of the head width and thus leading Maison Sébastien Geslin to be nominated at the Silmo d'Or 2022 in the "Technological Innovation Eyewear" section with the mod. Game Mad.

Savoir-faire is an extreme act of generosity and is often directly connected with art, which can also be conveyed through a pair of glasses. In the case of Tarian, the discourse becomes almost a family matter. Because behind this refined French brand is Jérémy Miklitarian, son of Alain Mikli(tarian). Despite having followed in his father's footsteps, Jérémy continues to cultivate his passion for ceramics in his Paris atelier, which in 2022 received the "Made in Paris" award from the mayor for the series of "Terres Marbrés" ceramics handmade according to an ancient technique. It was therefore a moment for Jérémy to combine these two talents, seeing them converge in a limited edition of glasses, characterised by a thin titanium structure with ceramic decorations as for the mod. Ceramic T-011, of which only 200 are available.

Pure poetry that for Rolf Spectacles becomes the sharing of a horizon, of the pure breath of the mountains and forests of Tyrol, in Austria, where the brand has its headquarters. The roughness of the rock walls translates into stone glasses with a wooden core, including the Topolino model. 0km materials are thus used to feel part of the landscape, creating a strong connection with nature. The same feeling that can be felt wearing the glasses of the Zeppelin collection, offered by Lucas de Staël in genuine cow leather also in the croco print version, or in a striking combination of stone and cow leather. To make them special, a classic, timeless aesthetic, and details such as the moulded rims in which lenses are "clipped on" without heating, while comfort is ensured by the moulded nose. Because for savoir-faire, beauty and uniqueness only make sense if they also respect well-being and comfort.

An enigmatic look is glimpsed through lenses in unusual colours such as red and yellow. Glasses that reflect a different point of view and immediately convey our personality. Strong and creative. But also optimistic...

Between the sky and the sea

Blue, a colour that perfectly expresses the moods of body and soul without ever being dull. Looking at art, sport, vintage and underground cultures, glasses continually probe its depths

Glasses are transformed, turning into the crossroads of harmonious encounters between irregular shapes, imperfect geometries and different chromatic density levels. A place where to shade new visions of design and fashion but also for a new lifestyle